A year ago yesterday, I found Scout in the middle of Compromise Street in Pigspittle.  Her eyes were infected, she was wet, and meowing like crazy.  I took her home.  A couple of months later, when she weighed enough, the vet removed her eyes.  They were just too far gone to save.  But she bounced back like a trooper.  A friend of mine gave her the name Scout, after To Kill a Mockingbird‘s Miss Jean Louise Finch.  She is the center of our universe. 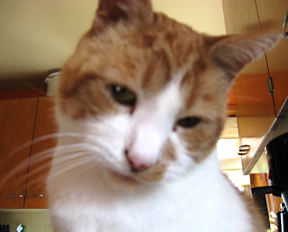 19 Comments → Scout Picture of the Week